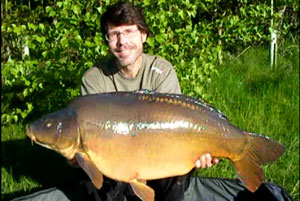 Some old catch reducing myths about winter carp fishing and baits still persist. Some of these myths might be things you have unwittingly accepted as facts so beware! You would be surprised to know what some of them are so read on for the truth and reap the rewards of seeing things from a fresh carp fishing perspective!

1) Carp hibernate for the winter.

Carp do slow down their feeding in winter as their bodies are very much in tune with the temperature of the water surrounding them which means that the enzymes that control their metabolism, digestion, amounts of swimming and movements done is generally much more restricted in order to save energy. Actually finding winter carp is one of the major problems in winter and early spring and this is why regular feeding with baits is so important to keep fish visiting spots which makes catching them much easier. To do this in order to be much more in command of fish feeding behaviours in a lake takes a quantity of bait and is one of the reasons I continue to make my own homemade baits despite all the commercial baits around. (Extremely effective winter baits do not require loads of expensive high protein ingredients!)

2) Carp stop feeding completely when it is cold.

Carp require far less protein food in the winter as they have already binged on protein-rich food in the autumn when such food was abundant and easily digested due to higher water temperatures more favourable to digestive enzymic action. Carp can produce stored fat from protein foods which is used to sustain basic vital energy levels in the cold when feeding is very much more energy-inefficient. Carp regulate their bodies in many ways and although carp can become much more inactive during certain periods they do feed on and off in the winter more often than it might appear on the surface. But you need to really think like a fish and not an angler in winter especially. Simply turning up and sitting in one spot hoping to catch fish is not enough in winter.

Sometimes it is better to keep moving your baits and rigs about and even move swims too until you get some indications that carp are actually present in your area because carp will shoal up and become more concentrated in various areas in winter compared to summer time. The advantage of this fact is that when you find the fish and really get into them it is possible to catch numbers of big wary fish in a short space of time. Some of my best ever catches have been in winter time; for instance back in 1998 I banked 3 thirties in just half an hour from an seriously pressured Essex lake. In contrast, I could never land more than one thirty per 12 hour period in the summer months as the fish were so cute. The biggest fish in a lake can be very vulnerable to capture when the weather turns cold as natural food stocks reduce, and as angling pressure reduces wary can change their behaviours and make more mistakes on fishing hook baits!

3) Carp find the deepest spot in the lake and stay there for the winter.

There are times when carp will seek deeper water, but for a variety of reasons. Initially it may be that they seek warmer water as waters on the surface get suddenly cooled. It might seem strange but water can form layers with pretty significant temperature differences. Water density is an important factor to do with carp comfort and also temperature and to do with carp willingness to actually feed more intensively. For instance, just at the point a lake is going to freeze over, water density rises and carp are spurred on to feed more intensively. Also there are so many experiences of many anglers who have caught successfully under the ice when formed that water density is a very interesting factor in winter fishing.

As opposed to sitting at the bottom of the deepest water carp will often find an area which is more comfortable or safe for them for any of a vast number of reasons, and often fish will sit in the middle layers there in a tight group, but carp do many things that might at first appearances seem strange. I once lifted a double figure carp out of the water after I noticed it just sitting still right up against the bank on a relatively calm day in January at a time when nobody had been fishing this particular lake. I simply crept up it � and swiftly picked it up as it was only in a foot of water. I guess it just felt more comfortable there yet it was on the opposite side of the lake hit by milder winds and there was no cover for it like reeds or bushes or pads, except short grass on the bank. Although this fish appeared like it might be asleep on the surface or something, it obviously had not been asleep as it swam to that position, and it certainly swam off very vigorously when I put him back in straight after picking him up!

4) Fishing on the end of a strong wind is good advice.

Not in winter for much of the time! If you are sitting on the end of a cold north-easterly blow the chances are good you will not only be freezing, but the carp will be focussed more on conserving energy and not feeding! Carp are much more likely to feed in shallow margins on the end of a gentle breeze on a clear sunny mid-afternoon in January than on the end of a very cold howling wind in November or even early April.

5) Using lots of free baits is always a bad thing in winter.

No it depends what they are! Boilies were traditionally high protein and in the winter this is certainly not an ideal situation because it takes too much time and too much energy for carp to digest lots of protein in the low temperatures of winter. Boilies were originally used in small quantities all year round anyway but the original recipes for boilies were used as pastes. Low to mid-protein boilies are better digested for many reasons. But the low protein boilies specifically formulated for winter use are in theory the best for attracting fish without filling them up or slowing down their metabolism too much making them even less easily caught. Pastes and low protein fast steamed baits are minimally boiled baits are very successful winter baits.

Pellets are very often the high oil kinds and they will definitely reduce your chances in winter especially if you chuck them in by the kilogram. Using specially chosen baits that are extremely digestible is the best bet in winter.

What matters is keeping bait going into your areas regularly so you keep the fish looking for food there. It has become very obvious in the lakes I have fished over the last 35 years, that if people are feeding the lake with enough bait through the winter that fish will certainly revert back to feeding on natural food items to a much higher degree and not bother go looking for anglers baits. Where anglers baits are regularly introduced fish can get caught regularly through periods of the winter with most restrictions on this usually being fishing pressure and extremes of weather (including icing over of the water.)

Fishing over baits that have broken down is a really effective way to fish especially for wary fish, but in particular late autumn, winter and early spring. This way you can introduce a significant area of attraction and not feed the fish up! The term boilies is not a very accurate description of such baits today. For a start, many are morphed into a kind of half-way house bait that has not decided if it is a pellet or a boilie. Certain boilies are not boiled at all but steamed. Certain boilies and pellets are simply compressed during their mechanical formation thus shaping them their actual ingredients hold their shape. Why is it that the average carp angler today thinks that a boilie has to be round and last 24 hours immersion in the water when these 2 factors alone can severely reduce your chances of catching?!

Uniquely-shaped homemade baits made from formulas designed to break down quickly in cold water utilising more unusual substances and exploiting unique characteristics like alternative buoyancies and permeabilities and solubilities etc are really excellent edges. Such baits are not at all difficult to make once you know how to formulate them! I have used very simply baits like this for years and years and they can be surprisingly cheap because you are not filling your baits with lots of expensive high protein ingredients! I have made many successful homemade winter ground baits based on boilie recipes with significantly bioactive properties bulked out with very cheap ingredients that break up easily in water. Using this tactic with boilies on the rigs really works well. I find using more balanced and buoyant boilies work better in general than using just bottom baits in winter although the opposite approach of over-weighting bottom baits can be a good trick depending on the ways fish are feeding on the day.

One thing to remember is that very frequently when winter carp fishing, if you are not fishing with much bait the likelihood is that other species will mop up your free baits leaving you fishing with single hook baits anyway. You will not establish much of a competitive edge on a lake if all you are using is maggots and fake corn because so many other anglers are simply copy cats and this can drastically reduce any edge such methods might originally have had. Roach and bream and other species like perch are much bigger than average these days at many waters, and are well used to eating baits intended for carp including maggots, corn, pellets and hemp. Using alternative homemade free bait boilies in alternative sizes, shapes, solubilities, densities, buoyancies etc, instead of automatically using mass-produced round or barrel type ones ensures you will have effective winter baits at all times.

The electric excitement of catching a new personal best carp in winter on homemade carp baits you made yourself is an experience you will never forget I can assure you and I have done it enough times now that I know you just do not get the same excitement when catching fish on readymade baits!